Home » GENERA A » Aloe » Aloe aculeata in the Royal Botanical Gardens in Sydney, Australia
Back to Category Overview
Total images in all categories: 9,840
Total number of hits on all images: 4,471,463

Aloe aculeata in the Royal Botanical Gardens in Sydney, Australia 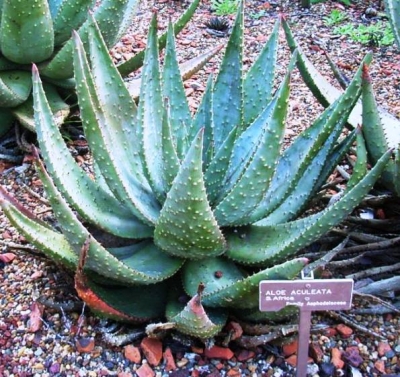 As the specific name aculeata says, it is prickly! The big single rosettes of Aloe aculeata are in winter adorned with impressive yellow or orange inflorescences. Single raceme flowers appear on the younger plants and branched panicles on mature ones. This Aloe is common in parts of the northern provinces of South Africa, particularly in Mpumalanga and Limpopo near Lydenburg and Ohrigstad, as well as over the border in Zimbabwe and Botswana.

Resemblance to some other species occurs for many life forms on earth, from being distantly related. Features of a plant or animal allow it being placed closer to some and further from others, vague suggestions recognition caused by shared ancestry. Such kinship is sometimes confirmed by scientific verification, showing real historical developmental lines; and sometimes chance played a role in unrelated specimens (Jeppe, 1969).