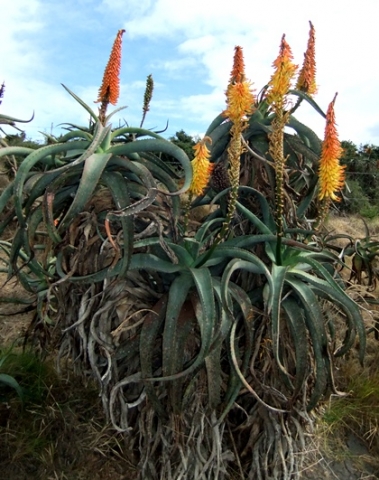 Aloe africana, the Uitenhage aloe, is a tall, single-stemmed plant reaching 2 m to 4 m in height (SA Tree List No. 28.2). Occasionally a plant will branch from the base. The dry leaf remains persist below the green rosettes on the generally erect stem.

This Eastern Province species grows from the Gamtoos River near Humansdorp eastwards to Port Alfred and Bathurst, much seen near Uitenhage and Port Elizabeth. Inland spread follows river valleys as far as Bedford.

The habitat is dense, spiny scrubveld of lowlands and near the coast, the plants rarely growing in the open. The climate includes a hot summer and a frost-free winter. The land receives mainly summer rain, from 375 mm to 500 mm per annum.

A. ferox, also distributed here but more widely, is more likely to grow in the open, less among dense bush. Although the species distribution is not very large, A. africana is not considered to be threatened in its habitat early in the twenty first century, its population still stable (Reynolds, 1974; Van Wyk and Smith, 2003; Jeppe, 1969; Coates Palgrave, 2002; www.redlist.sanbi.org).