Home » GENERA A » Aloe » Aloe aculeata in the Walter Sisulu National Botanical Garden
Back to Category Overview
Total images in all categories: 9,840
Total number of hits on all images: 4,462,214 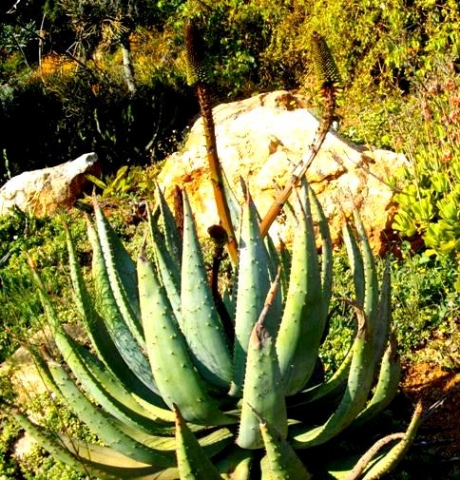 The leaf rosette of Aloe aculeata becomes 1 m tall and equally as wide. It is usually stemless, or may have a short, procumbent stem. The long, broad leaves, up to 12 cm wide at the base, curve inwards in their upper parts, bringing about a rounded look to the rosette. Leaf colour is dull green or grey-green. Both leaf surfaces as well as the margins are covered in numerous scattered spines, arising from thick tubercular bases. These tubercles are paler in the northerly parts of the plant’s distribution, appearing whitish against the green of the leaf.

The raceme of tubular perianths is densely flowered, narrow and tapering to its top. The flowers may be bicoloured with orange to red buds becoming yellow when opening, or remaining single coloured, orange or yellow. Flowering starts late in autumn and is over before the end of winter.

The plant is known to hybridise in nature with several other Aloe species.  This often causes difficulties for those attempting plant identification, but none to strollers just admiring the flowers or workers distributing the pollen (Van Wyk and Smith, 2003; Jeppe, 1969).