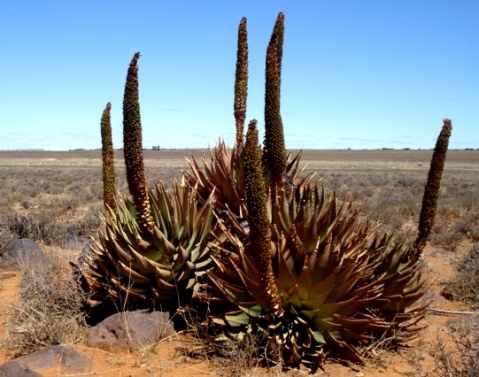 Aloe broomii is most of the time a large, single-stemmed plant, occasionally branching at the base or higher up, but not often as much as seen here. Commonly classified among the stemless aloes, an erect stem of up to 1 m does sometimes occur. Such a stem is not directly visible, for the remains of the old dry leaves persist on it down to the base. The typical height reached by a mature plant is around 1,5 m.

Every green fruit capsule on these densely stacked stems is preparing a large number of seeds. However conservative one wishes to estimate total annual seed production here, the number should be huge. Yet there are no other A. broomii plants to be seen on the large tract of open land in the photo. This gives some idea of nature's over-provision to cover for many forms of bad luck. The will to live through offspring is one of the most magnificent forces in nature to study.

The species distribution lies in the Western Cape and Northern Cape from as far west as Beaufort West, Carnarvon and Prieska, to the Eastern Cape as far as Dordrecht and Barkly East. Northwards it crosses the Gariep River into the southern Free State and western Lesotho, southwards into the Langkloof.

This Aloe was first collected in 1905 by Robert Broom, well-known South African Palaeontologist and Anthropologist of the twentieth century. The plant was later named after him by Schonland.

Next to the story of humanity's coming to be on earth, there are thousands more fascinating tales not yet fully told, of species meriting the attention of high curiosity people interested in science (Reynolds, 1974; Van Wyk and Smith, 2003; Jeppe, 1969; iSpot).