Home » TYPES » Trees » Loxostylis alata
Back to Category Overview
Total images in all categories: 12,058
Total number of hits on all images: 7,353,528 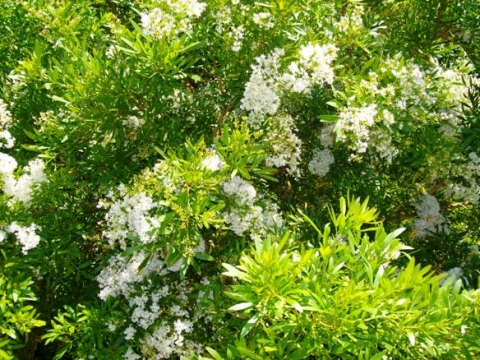 Loxostylis alata, commonly known as tarwood, is a small evergreen tree reaching heights up to 5 m (SA Tree List No. 365). This is the only tree of its genus in South Africa. The pale grey bark becomes shallowly, longitudinally fissured and corky with age.

Male and female flowers grow on different trees of this dioecious species. The tree can be a spectacular sight when in bloom, as this one was when photographed in March in Kirstenbosch. The normal flowering season is September to January, but that should be expected from the tarwood trees growing in nature.

When plants are grown outside their natural distribution ranges, performance may deviate from normal expectations. Some may suffer, others thrive, adopt new growth cycles or even invade.

The species distribution is in montane forest of the southern Cape in the Western Cape, the Eastern Cape and KwaZulu-Natal in narrow strips fairly near the coast.

The trees are found on rocky slopes and sandstone or quartzite cliffs and outcrops adjoining karoid terrain. It is not considered to be threatened in its habitat early in the twenty first century (Coates Palgrave, 2002; Van Wyk and Van Wyk, 1997; Pooley, 1993; http://redlist.sanbi.org).