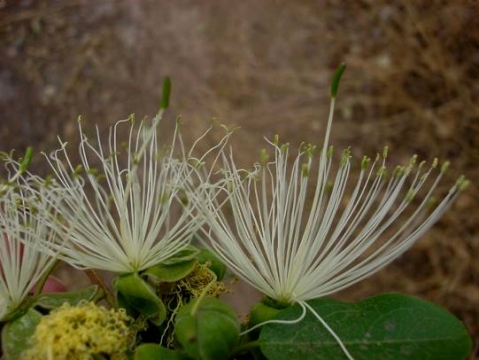 The sweetly fragrant flowers of Maerua angolensis subsp. angolensis grow stalked in stem-tip spikes, solitary from leaf axils or clustered on spur-branchlets. They are predominantly conspicuous masses of long (up to 4 cm), creamy white stamens that spread in a hemispherical umbel-shape before fading to yellow as they shrivel.

The small, oblong anthers are pale green and bilobed. The female floral part protrudes far above the stamens in picture. The white stalk is thicker than the filaments around. This is not the style, but the stalk of the elevated, green ovary, called a gynophore.

Gynophores are elongated ovarian stalks grown from the flower receptacle to position the ovary up high, as in this plant. Several maeruas and some other flowers of the Capparaceae family (as well as members of still more flowering plant families) bear their ovaries elevated above the flower base. There is still probably a very short style and definitely a stigma at the tip of the green ovarian structure in picture.

There are no petals on the flowers of this Maerua; the four green sepals are up to 1,8 cm long, faintly white-haired. They show marked channels where they meet in the bud stage.