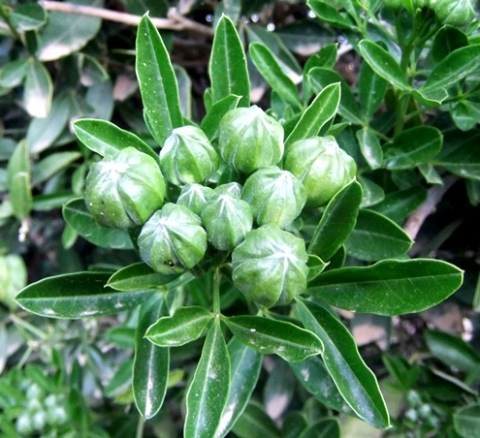 The leaves are mostly trifoliolate, occasionally with up to five leaflets. The leaves grow on petioles of up to 6 cm, the petiolules of the three leaflets short. Both petioles and petiolules are channelled on top.

The leaflet is elliptic to obovate, its tip tapering or rounded, the base tapering, the middle leaflet slightly larger. The surface is dark green and leathery, the veining inconspicuous apart from the midrib. Surfaces of the coastal form may be succulent. The leaflet margins are entire.

The flowers grow in corymbs at stem-tips. A corymb is a flat-topped or convex cluster, the outermost flowers on longer stalks arising from lower levels on the stem being the first to open. In picture the green, ridged sepals of the outer buds are near opening.

The flowers lack petals, the dense cluster of whitish stamens succeed in replacing a corolla in appearance. The stamens become 3 cm long.

The species distribution is coastal from the southern Cape through KwaZulu-Natal and inland over much of the region north of the Vaal River. It continues beyond the border only in southern Africa.

The habitat is forest and woodland as well as dune bush. The species is not considered to be threatened in its habitat early in the twenty first century (Coates Palgrave, 2002; iSpot; http://redlist.sanbi.org).