Home » TYPES » Trees » Millettia grandis
Back to Category Overview
Total images in all categories: 11,792
Total number of hits on all images: 6,949,229 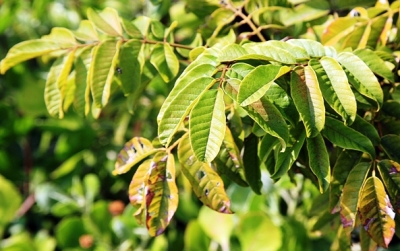 Millettia grandis, commonly the umzimbeet, is an attractive, medium-sized tree with pretty leaves and spectacular terminal clusters of pea-shaped flowers (SA Tree List No. 227). It may reach heights from 13 m to 25 m, although small, stunted trees are also common.

The leaves, yellow-green here, may also be blue-green or dark green. The tree is deciduous, while new growth is rapid.

The species distribution is coastal KwaZulu-Natal from Richards Bay to the Eastern Cape as far as East London, most common in Pondoland.

The habitat is coastal forests and forest margins at low altitudes in various soils, smaller in shale. The species is not considered to be threatened in its habitat early in the twenty first century.

The seeds are poisonous and may cause danger if eaten in quantity. They have been used in treating roundworm. The roots also feature in traditional medicine remedies for insomnia and tension (Coates Palgrave, 2002; Pooley, 1993; www.plantzafrica.com; www.redlist.sanbi.org).