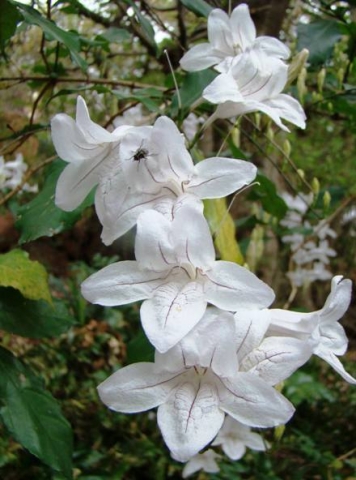 The petioled leaves are simple and opposite, their shape elliptic. The leaf tip is attenuated into a driptip, the base tapering narrowly. The dark green blade is glossy above and dull green below, where the midrib and lateral veins are prominent. These veins ascend before curving into the adjacent upper ones without reaching the margins. There are red-purple, hair-tuft domatia in the vein axils on the lower surfaces of the leaves. The leaf margins are irregularly scalloped or widely toothed. Leaf dimensions are up to 14 cm long and 3,5 cm wide.

The large white or mauve flowers grow in loose, stem-tip racemes during spring and early summer. Delicate purplish lines in the throats of the tubular flowers enhance their attraction. These lines are enhanced in ultra-violet light, serving as ‘landing lights’ for carpenter bee pollinators that seek out the flowers in the limited light of forest shade.

The fruit is a narrowly club-shaped and beaked, woody capsule of up to 3,5 cm long. It splits in half explosively when ripe, ejecting about four seeds.

The species distribution is in the far east of the country, from the east of the Eastern Cape, coastal KwaZulu-Natal and the Mpumalanga and Limpopo Lowveld, as well as neighbouring countries, at least Eswatini, Mozambique and Zimbabwe.

The habitat is shady, moist areas, such as the understoreys of deep shade forests near rivers. The species is not considered to be threatened in its habitat early in the twenty first century.

The wood served long ago in lighting fires from friction. The plant is a popular garden subject grown widely in shady areas from seeds or cuttings.