Home » TYPES » Trees » Leucosidea sericea
Back to Category Overview
Total images in all categories: 10,525
Total number of hits on all images: 5,175,438 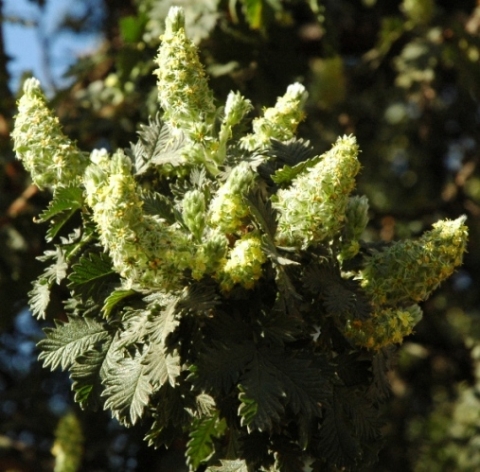 Leucosidea sericea, or ouhout in Afrikaans, is a pioneer tree (or shrub) on grassy slopes and kloofs in the eastern parts of South Africa, away from the coast (SA Tree List No. 145). The species is often a mere straggling, greyish shrub, but rarely reaching 15 m.

The stems are brittle. Young branches appear unkempt with persistent, hairy stipules. The leaf structure is compound, bearing two to three pairs of leaflets, as well as a terminal leaflet (imparipinnate; no terminal leaflet present makes a compound leaf paripinnate). The terminal leaflet and the adjacent pair are usually the biggest on the leaf. Leaves are alternate or spirally arranged on the stems. The leaflet shape is obovate, leaf apices rounded and the margins distinctly toothed or serrated.

The flowers are small and greenish to cream or pale yellow, blooming at the end of winter and in spring. Flowers are densely clustered in erect racemes at the tips of the young branches. Each flower has two rows of sepals and five obovate petals. There are ten to twelve stamens per flower. The fruits are small nuts.

The tree plays a role in traditional medicine. It is also regarded as an indicator of a stream being suitable for stocking with trout (Coates Palgrave, 2002; Schmidt, et al, 2002).

(Also see the Plant Record on the species elsewhere on this Site.)