Home » TYPES » Trees » Laurophyllus capensis
Back to Category Overview
Total images in all categories: 10,534
Total number of hits on all images: 5,183,720 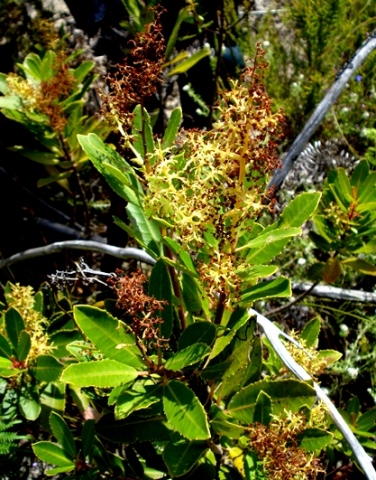 Laurophyllus capensis, the iron martin or ystermartiens, is a large evergreen shrub or small tree that reaches 6 m in height (SA Tree List No. 366). The genus is monotypic, L. capensis being its only member.

The bark is grey and smooth, the erect upper branches leafy, stems becoming bare lower down. The tree is dioecious, male and female flowers occurring on separate trees.

The species distribution is a strip along the southern coast of the Western and Eastern Cape from the Hottentots Holland Mountains to Uitenhage.

The habitat is tall scrub close to moisture, forest margins and stream banks. The species is not considered to be threatened in its habitat early in the twenty first century (Coates Palgrave, 2002; Bean and Johns, 2005; www.plantzafrica.com; http://redlist.sanbi.org).