Home » TYPES » Trees » Hyphaene coriacea
Back to Category Overview
Total images in all categories: 10,222
Total number of hits on all images: 4,875,140 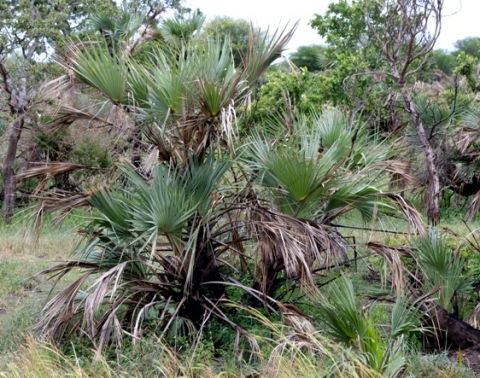 Hyphaene coriacea, commonly the lala palm and previously H. natalensis, is a fan-leaved, dioecious tree of the Arecaceae family reaching heights from 3 m to 7 m (SA Tree List No. 23). The tree is often seen in low-growing to medium-sized clumps that keep spreading through suckering, some stems reclining.

The grey-green leaves or fronds are palmately compound on long petioles. The leaflet base is asymmetric. A leaf may reach a length of up to 2 m including its petiole that has black, sharp and recurving spines along the margins.

The fruit is about 5 cm in diameter, pear-shaped with narrow base. Large numbers of fruits are produced, remaining on the tree for two years to ripen and up to another two years before they fall.

The distribution of this tree in South Africa is in the eastern Lowveld of Mpumalanga and Limpopo, as well as along the KwaZulu-Natal and Mozambican coasts, large stands common in Maputaland. The trees grow in low elevation bushveld in sandy soils, often near swamps, pans, rivers and in coastal grassland. The species is not considered to be threatened in its habitat early in the twenty first century.

The tree holds many benefits for people. Palm wine, basket weaving from the leaves and ornaments carved from the seed kernels are all well-known.

Trees found in the veld are, however, used for these products as growing it is tricky. The large taproot makes the lala palm hard to transplant. It is also slow-growing and difficult to grow from seed. The fact that it thrives in saline or brackish water may complicate matters further for horticulturist and farmer (Coates Palgrave, 2002; Van Wyk and Gericke, 2000; Van Wyk and Van Wyk, 1997; http://redlist.sanbi.org).