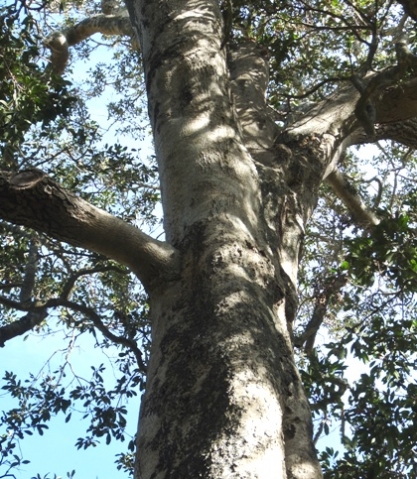 The tall trunk of Ilex mitis var. mitis usually supports a dense crown. It has pale grey to light brown bark that is smooth on young trees, fissured, rough and chunky on mature ones. Trunks may reach 1,2 m in diameter, but the species doesn't usually achieve great heights, becoming straggly.

Young stems show a red or purplish tinge and a covering of raised lenticels; the small branchlets among the leaves may be white.

The bark of this tree is sometimes removed in patches for use in traditional medicine.

The European holly, I. aquifolium, is the source of the red berries traditionally associated with Christmas. It is sometimes grown in southern Africa, but as I. aquifolium is dioecious, trees of both genders must be planted to yield the berries (Coates Palgrave, 2002; Pooley, 1993).