Home » TYPES » Trees » Hyphaene petersiana
Back to Category Overview
Total images in all categories: 10,164
Total number of hits on all images: 4,829,281 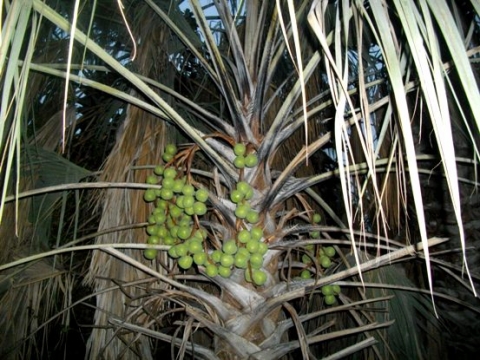 Hyphaene petersiana, in Africa the makalani palm and in South Africa the northern lala palm or mokola palm, is a fan-leaved tree of the Arecaceae family growing single or multiple stems to heights up to 10 m, occasionally 18 m (SA Tree List No. 24). This palm is closely related and similar looking to the lala palm or H. coriacea that bears pear-shaped fruit, is usually multistemmed and doesn't get as tall.

The grey-green leaves or fronds of the mokola palm are palmately compound on long petioles, clustered at stem-tips. The leaflet base is asymmetric. A leaf may reach a length of up to 2 m. The yellow-green petiole has black, sharp, sickle-shaped spines along its margins.

H. petersiana male flowers grow in short-lived, short spikes among the leaf bases. Each flower has three overlapping calyx lobes and ovate, outwards curving petals forming a short tube at the flower base around the six stamens.

The larger female flowers are short-stalked, occurring in large, branched sprays. Their sepals are ovate and overlapping, slightly shorter than the petals around the sub-globose ovary.

Green fruit of Hyphaene petersiana in picture are ripening below the leaves close to the stem, clustered on long, brown, arching stalks. This is a female tree, the species being dioecious. A mature northern lala palm may bear very many fruit at a time.

The long, protruding leaf stalks can be seen among the fruits. Thick, wiry, brown hairs that over time separate from the margins of leaf stalks are conspicuous upon the stems. Some straw-coloured leaf remains are visible, hanging down close to the stem in the background in the photo.

The species distribution in South Africa is restricted to the easterly low altitude regions of Mpumalanga and Limpopo. The habitat is sandy plains, floodplains, often near rivers and swamps. The species is not considered to be threatened in its habitat early in the twenty first century (Coates Palgrave, 2002; Van Wyk and Van Wyk, 1997; Wikipedia; http://redlist.sanbi.org).