Home » TYPES » Trees » Jubaeopsis caffra
Back to Category Overview
Total images in all categories: 11,036
Total number of hits on all images: 5,685,994 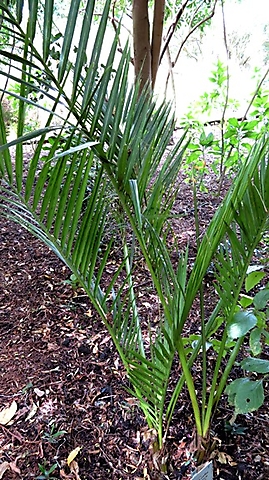 Jubaeopsis caffra, commonly the Pondo palm or Mkambati palm, is an evergreen tree reaching heights around 5 m, occasionally 8 m (SA Tree List No. 27). Branching from the base, the stems may be erect or recline and sometimes branch higher up as well. Stems become up to 40 cm in diameter. It is the only species of its genus in South Africa, its closest relative growing in Chile.

The pinnate leaves are feather-like with no spines on the leaf stalks. A leaf may be up to 6 m long, its linear, blue-green to bright green leaflets from 25 cm to 50 cm long and usually 1 cm to 2 cm wide.

The green to orange fruits are almost spherical, about 2 cm in diameter. They look like miniature coconuts covered in fibrous coats, complete with coconut-like white edible pith and some milk, also a woody centre.

The species distribution is very restricted in coastal Pondoland in the Eastern Cape, the plants occurring on the northern banks of the Mtentu and Msikaba Rivers. The sapling in picture was seen in Kirstenbosch.

The habitat is coastal forest on steep sandstone cliffs, close to and above river banks at elevations from 10 m to 80 m. Plants close to the sea cope with salt spray. The species is considered to be endangered early in the twenty first century due to harvesting of the fruit, horticultural popularity and to some extent fire.