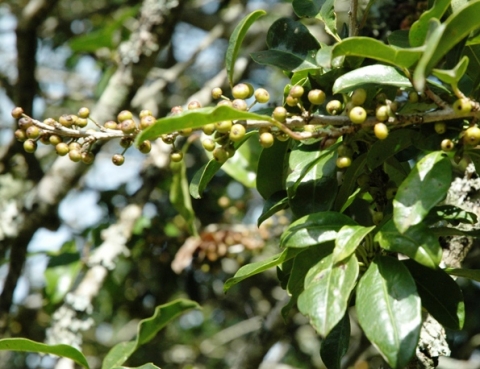 Ilex mitis var. mitis, the African holly or without (white wood) in Afrikaans, is a medium to large tree reaching heights around 30 m (SA Tree List No. 397). This is the only representative of the genus in South Africa.

The leaves are spirally arranged, elliptic, shiny and hairless. The midrib is conspicuous while the regular loops of the lateral veins are distinctive. The leaf apex may taper or be rounded with a hair-like tip.

The flowers are white and fragrant, growing in small axillary panicles. The sexes are represented by separate trees (dioecious).

The fruit is an edible, spherical berry, still green in this picture, but ripening to a shiny crimson by autumn or winter. The fruit attract birds.

The white wood, a good timber, gave rise to the Afrikaans common name.

The distribution of this variety is along the South African south coast and easterly regions, found in all provinces apart from the Northern Cape and the west of North West and the Free State. The tree is widely represented in Africa, growing as far north as Ethiopia and in West Africa.

The habitat is mainly riverine forest and thicket, sometimes open woodland. The tree is not considered to be threatened in its habitat early in the twenty first century (Coates Palgrave, 2002; Schmidt, et al, 2002; http://redlist.sanbi.org).