Home » TYPES » Trees » Hyphaene petersiana ripe fruit
Back to Category Overview
Total images in all categories: 10,222
Total number of hits on all images: 4,875,027 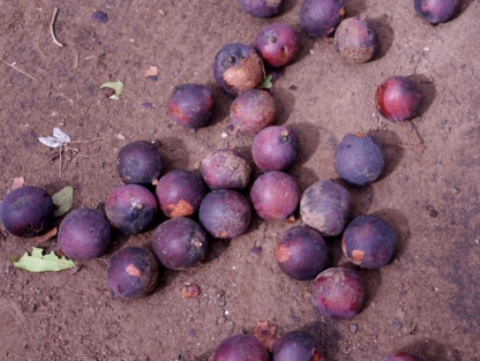 These ripe fruits that have dropped off the Hyphaene petersiana tree appear plum-like. They are globose to slightly ovoid, up to 5 cm in diameter, sometimes with a dull shine. The colour of the ripe fruit varies from purple or pinkish to orange-red or brown. Below the skin there is a thin sweet-tasting layer of spongy, fibrous fruit pulp with a gingery flavour, sometimes chewed by children.

Elephants and baboons eat these fruits, dispersing them in the process. The fruits that drop without being eaten, however, may also be germinated. When so many seeds are produced, it is not serious that the germination rate is low.

In the centre of the fruit, the white endosperm, the fruit kernel, is edible and contains a tasty coconut milk-like liquid when young. The seeds are eaten more from hunger than taste, when famine food becomes important.

Once the kernel has become hardened, it resembles the vegetable ivory found in South America and is also sometimes made into small ornaments by the locals.

Young leaves and upper stem parts are eaten by people as a vegetable. The seeds are sometimes covered to make them sprout, upon which the young growth is also eaten. Older leaves are used for weaving baskets, while birds weave nests from them (Coates Palgrave, 2002; Van Wyk and Gericke, 2000; Van Wyk and Van Wyk, 1997; Fox and Norwood Young, 1982).