Home » TYPES » Shrubs » Waltheria indica
Back to Category Overview
Total images in all categories: 11,442
Total number of hits on all images: 6,209,917 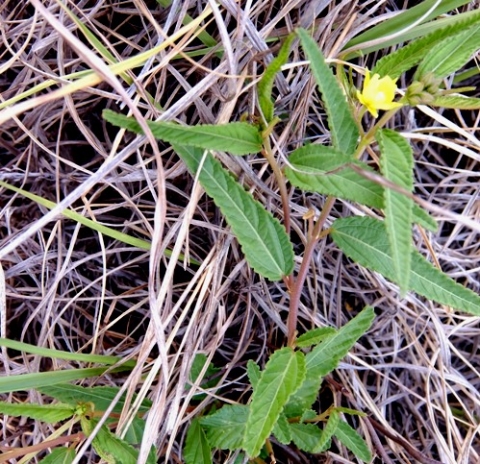 Waltheria indica is an erect shrublet reaching 50 cm in height. The plant has a covering of short hairs, some of which are branched and glisten in sunlight.

The short-stalked, alternate leaves are narrow, lance-shaped, tapering to blunt, pointed or rounded tips; the leaf base is rounded. Tiny leaf stipules are present at the petiole base. Leaf surfaces appear quilted around the sunken midrib and ascending lateral veins. Leaf margins are shallowly and irregularly toothed.

The small, yellow flowers grow in dense, axillary, cyme-shaped clusters and may be stalked. Sepals, petals and stamens occur in fives, the filaments united in a tube. Blooming happens in summer and autumn.

The plant occurs in South Africa only north of the Vaal River and parts of KwaZulu-Natal. This is the only one of the 67 Waltheria species found in southern Africa. The photo was taken on the Magaliesberg. The plant occurs widespread in the tropics, also in Hawaii.

The habitat is diverse as the distribution is so large, found in grassland, bushveld, on rocky ridges, tropical conditions and on land where the vegetation has been disturbed. The species is not considered to be threatened in its habitat early in the twenty first century.