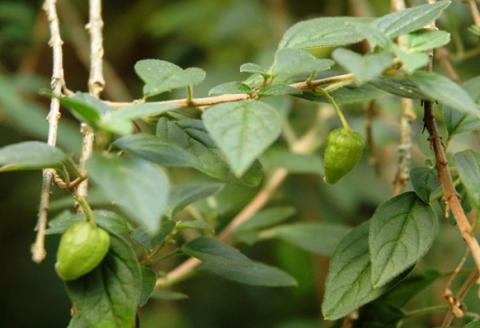 The bush violet, as Tinnea barbata is commonly known, is a compact shrub occasionally reaching 4 m in height. The bark is pale grey-brown on the much branched stems that become woody as they age.

The opposite, stalked leaves are ovate to elliptic tapering to acutely pointed tips. The margins are entire. The blades are hairy with the veins markedly indented on the upper surface, prominent and whitish velvety below.

The species distribution is a small area near Barberton in Mpumalanga. The habitat is mountanous grassland at high altitude on the mountains. The species is not considered to be threatened in its habitat early in the twenty first century.

The 19 known Tinnea species are all from Africa. They form part of the Lamiaceae family. The other Tinnea species found in South Africa have brown flowers.

T. barbata is grown in gardens, sometimes from seed as is done at Kirstenbosch. The plant should be cold resistant, given the habitat. It should thrive in shade if moderately watered (Onderstall, 1996; www.plantzafrica.com; http://redlist.sanbi.org).