Home » TYPES » Shrubs » Triumfetta sonderi leaves
Back to Category Overview
Total images in all categories: 8,892
Total number of hits on all images: 3,866,543 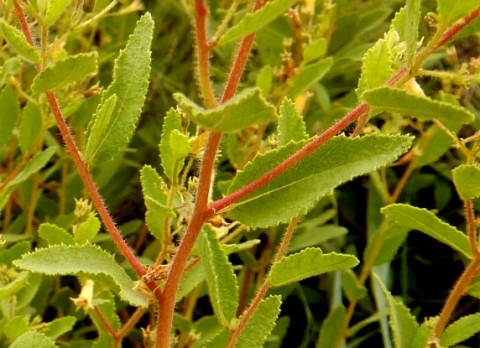 The leaves of Triumfetta sonderi are simple and alternate, growing on short stalks (petioles). Small stipules are present on the stems next to the petiole base.

The leaf shape is narrowly ovate, tapering to a slightly rounded tip and broadly tapering at the base. Both leaf surfaces are covered in rough, star-shaped hairs. The leaf margins are finely and irregularly toothed; the serrations tend to disappear near the leaf base. The leaves tend to curve up slightly along their margins, rather than folding along the whitish midribs. A few lateral veins from the midribs are spaced, curving in, becoming less visible near the margins.

The creamy yellow or reddish stems are also covered in dense hairs (Van Wyk and Malan, 1997; Germishuizen and Fabian, 1982).