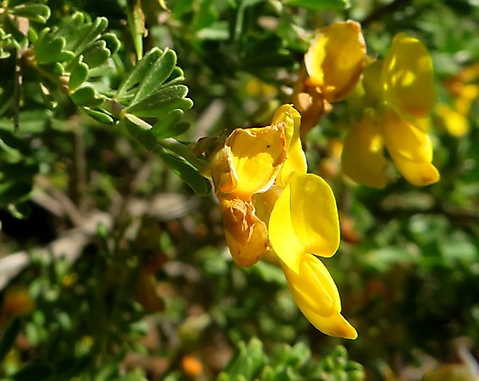 Wiborgiella is a genus of rigid, mostly resprouting, woody shrubs in the Fabaceae family, sometimes commonly called pennypeas. The generic name, Wiborgiella is a diminutive of Wiborgia, the genus from which most plants have been split in 2009. At least one was Lebeckia before, while the Calobota genus is also similar.

The young branches are usually brown.

The leaves of Wiborgiella plants are trifoliolate, sometimes petioled, more so on older branches. The leaflets are oblong to spatulate, sometimes obovate with notched tips. The leaves are flat-bladed, unlike the needle-like ones of Lebeckia. The green or blue-green leaflets are often covered in silky hairs and usually folded in along their midribs.

The inflorescence is a stem-tip raceme. The flowers resemble pea-flowers in shape, yellow or pink in colour. The petals don’t have hairs on the outside as found on Calobota flowers.

The thin-walled pods are oblong and inflated, rarely laterally compressed. The pods are not winged as Wiborgia pods.

There are nine species of Wiborgiella in this South African genus, most of them in the Western Cape fynbos, while some are also found in the Northern and the Eastern Cape. Several of the species are endangered, vulnerable, localised or rare early in the twenty first century.