Home » TYPES » Shrubs » Triumfetta sonderi
Back to Category Overview
Total images in all categories: 11,442
Total number of hits on all images: 6,209,639 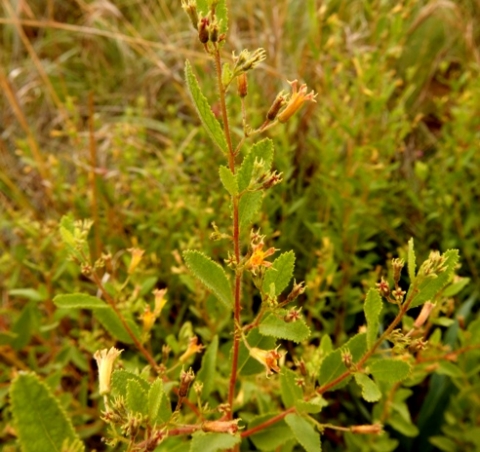 Triumfetta sonderi is one of the South African plants that is (among several other names), commonly known in Afrikaans as maagbossie (little stomach bush). It is a much-branched shrublet that grows erect stems from a woody rootstock to heights between 35 cm and 50 cm.

The flowers, borne in cymes at stem-tips or from leaf axils, are small and yellow in five-pointed star-shapes. The petals are obovate with somewhat square tips. A cluster of stamens is erect in the centre of the spreading corolla. The sepals have hood-shaped tips as well as a short, horn-like protuberance. Flowering lasts from late spring to early autumn.

The species is widely distributed in Gauteng, Limpopo, North West and the western extreme of Mpumalanga; also occurring in Botswana. It is well-known on the Magaliesberg and the Waterberg.

The habitat is stony slopes and rocky ridges of grassland. The species is not considered to be threatened in its habitat early in the twenty first century (Van Wyk and Malan, 1997; Germishuizen and Fabian, 1982; www.redlist.sanbi.org).