Home » TYPES » Shrubs » Wiborgiella leipoldtiana
Back to Category Overview
Total images in all categories: 11,506
Total number of hits on all images: 6,503,092 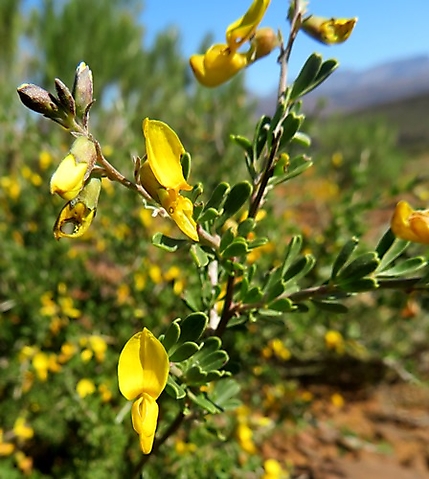 The trifoliolate leaves are alternate and sessile or short-stalked. The narrowly obcordate leaflets (heart-shaped with notched tip between two rounded lobes), are borne ascending to erectly, usually fairly close together in each leaf. The mid-green to dull green leaflets are faintly hairy, the blade halves folding in along the leaflet midrib.

The species distribution is in the Northern Cape as far north as Steinkopf, east to Sutherland and in the Western Cape as far south as Clanwilliam and the Cederberg. It is the most widespread of the Wiborgiella species. The photo was taken in the Biedouw Valley.

The habitat is sandy, clayey or rocky slopes in renosterveld and arid fynbos, as well as in disturbed places like roadsides. The species is not considered to be threatened in its habitat early in the twenty first century.

The palatable bushes are browsed by game and stock (Bond and Goldblatt, 1984; iNaturalist; http://redlist.sanbi.org).