Home » TYPES » Shrubs » Chironia baccifera
Back to Category Overview
Total images in all categories: 11,506
Total number of hits on all images: 6,494,244 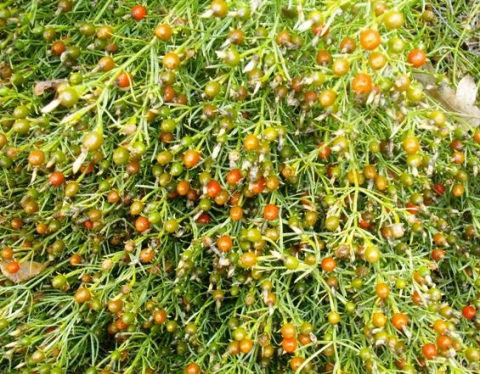 Chironia baccifera, the Christmas berry, is the exception in its genus that bears berries. The others have fruits in capsule form. The perennial shrublet is often dense and rounded, reaching heights from 60 cm to 1 m. The shrub grows fast from a woody base or suffrutex to heights of 50 cm, occasionally taller.

The species belongs to the Gentianaceae family. The Gentiana genus of this family has achieved fame for the blue-flowered gentian plants growing in the Alps. The Chironia genus is, however, mainly South African, represented here by about 30 species. Baccifera means berry-bearing.

Chiron was a well-behaved centaur in Greek mythology, the father of Medicine and Botany. Zeus honoured him by turning him into two well-known stars, Alpha and Beta Centauri, the Pointers of the Southern Cross. The Southern Cross is in our time below the horizon for modern Greeks, but their ancestors could see it, before some change took place in the earth's rotation.

C. baccifera grows coastally (and in some places somewhat inland), but only in all four the South African provinces that touch the ocean. All the others are landlocked.

The habitat is dunes and, dry, sandy soils, where the plants grow among scrub and in the open, also in renosterveld and some fynbos. The species is not considered to be threatened in its habitat early in the twenty first century.

The Christmas berry is a popular ornamental plant with a wide range of medicinal uses. It is also poisonous to some domestic animals.

This display of green and orange berries was photographed in Kirstenbosch during March. Flowering lasts from end spring through summer (Vlok and Schutte-Vlok, 2015; Bean and Johns, 2005; Germishuizen and Fabian, 1982; Letty, 1962; www.plantzafrica.com; http://redlist.sanbi.org).