Home » TYPES » Shrubs » Catophractes alexandri flowers
Back to Category Overview
Total images in all categories: 12,081
Total number of hits on all images: 7,379,107 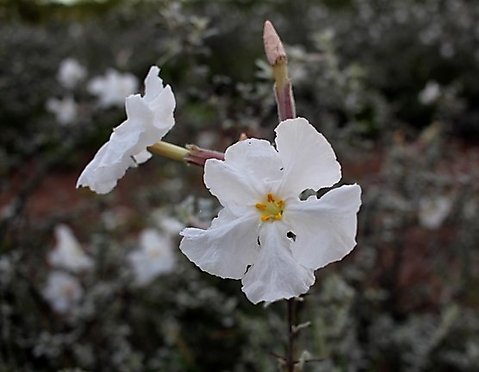 The stalkless, fragrant flowers of Catophractes alexandri grow solitary or in small clusters from stem-tips or upper leaf axils. The stem-tip in picture has at least three flowers. The hairy calyx is ribbed, its tube partly split on one side. The usually five, sometimes six calyx lobes are thin, about thread-like.

The mostly white but sometimes pale pink, pale green or cream corolla is slightly two-lipped and five to seven-lobed. Its long narrow tube is cylindrical at the base, funnel-shaped near the mouth. The outside of this tube is ribbed and hairy low down. The broad corolla lobes are round-tipped and wedge-based, spreading or reflexed. The common name, trumpet thorn, describes this flower shape. The flowers produce nectar.

The corolla lobes in picture have wavy margins. The tube is dull yellowish on the outside and the calyx lobes upon the lower part of it purplish. The furled bud above displays a dull pinkish and pointed corolla. The flower is about 8 cm long, the corolla spreading from 8 cm to 10 cm in diameter.

Pale yellow anthers are slightly exserted above the narrow corolla mouth, in picture forming a neat, small star. There are as many stamens as the corolla has lobes. The superior ovary is nearly globose, comprising two locules. The thread-like style is exserted, the stigma two-lobed.

Flowering happens from spring to autumn, mostly after rain.

The fruit is a woody and thick-walled, dehiscent capsule. It is elliptic in its central, bulging body part with a beak-shaped tip and tapering base. The equal valves or capsule-halves of the fruit husk are boat-shaped. Their outside surfaces are warty to prickly.

The dehisced husk remains on the plant, its two parts loose and rattling against each other in the breeze like castanets. This earned the plant another common name, rattlepod.