Home » TYPES » Shrubs » Centella difformis
Back to Category Overview
Total images in all categories: 11,506
Total number of hits on all images: 6,503,183 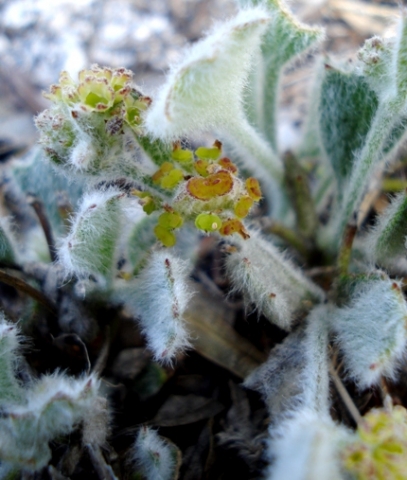 This Centella difformis plant was encountered along a path in the Fernkloof Nature Reserve during November. The plant is a stout, sprawling or erect shrublet growing from a woody suffrutex. Its branches sometimes reach heights ranging from 10 cm to 40 cm.

C. difformis is found on coastal flats and lower sandstone slopes growing in fynbos of the Western and Eastern Cape. The species is not considered to be threatened in its habitat early in the twenty first century.

Some Centella species are hairy, especially on leaves and stems, as is this white-woolly one. Several centellas are commonly known as pennyworts or in Afrikaans varkoortjies.

The Hermanus to Stellenbosch area is home to 17 of the about 50 Centella species, many of them perennials (little pig ears) (Bond and Goldblatt, 1984; http://redlist.sanbi.org).