Home » TYPES » Shrubs » Chironia baccifera and ancient doctrine
Back to Category Overview
Total images in all categories: 12,068
Total number of hits on all images: 7,363,116 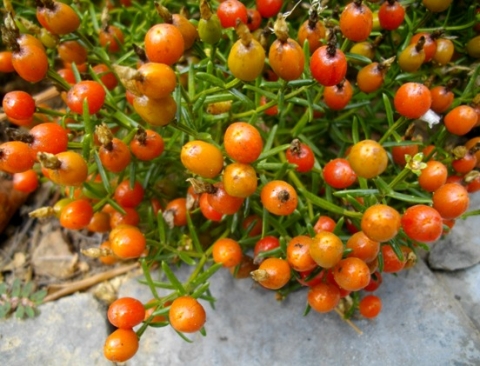 These ripening fruits of Chironia baccifera, in Afrikaans aambeibossie (little haemorrhoids bush), include some red, ripe ones. A few of the fruits are already wrinkled and desiccating; one having dropped off shows the inside of a five-pointed calyx.

The wrinkled appearance of the overripe aambeibossie fruit and the intriguing common name bring a story:

Healers of ancient times, as far back as Dioscorides and Galen, developed a conviction that herbs resembling the various human body parts can be used in treating ailments involving those parts. This notion went by the name of the Doctrine of Signatures, following a book published in 1621 by one Jakob Böhme. Theologically substantiated as a belief, it was argued that God would have wanted to show people what specific plants are useful for.

Patients complaining of haemorrhoids thus had their medicine men conducting fundamental inspections and reaching an almost inevitable conclusion: The wrinkled, fleshy red appearance of C. baccifera fruits presented a sufficient resemblance to constitute a valid remedy for the condition. How much good and how much harm were done remain unknown; the plant is potentially toxic.

As nature finds ways of filling vacuums, human thinking manages to shape notions filling every conceivable space around and beyond the components of proven knowledge, irrespective of their merit. There is no notion so absurd that it will not be espoused by somebody in some place at some time.

The meanderings of the human mind reach further than the realms of both science and the common good... the poor man's access to globetrotting and space travel.