Home » TYPES » Shrubs » Catophractes alexandri
Back to Category Overview
Total images in all categories: 12,081
Total number of hits on all images: 7,379,268 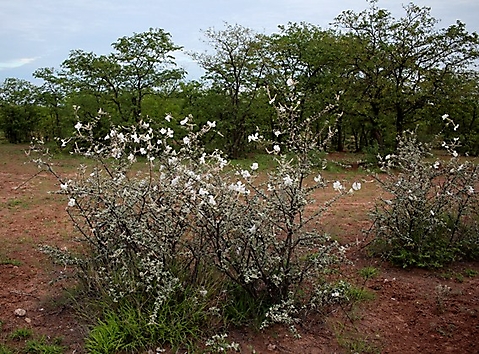 Catophractes alexandri, commonly known as the trumpet thorn or rattlepod and in Afrikaans as the papwieldoring (flat tyre thorn), swartdoring (black thorn) or gabbabos (friend bush), is a spiny, greyish shrub or small tree growing many stems from the base and reaching heights from 1 m to 4 m (SA Tree List No. 676.3).

The monotypic genus forms part of the Bignoniaceae family. The flowers are mainly in the upper parts of the bushes in picture. The greyish leaves on nearly black stems don’t cover all the older stems any longer.

The species distribution in South Africa is only in the far north of Limpopo, north of Musina and the north of the Kalahari in the Northern Cape around Gordonia, but common in several neighbouring countries, mainly Namibia, Angola, Botswana and Zimbabwe. The photo was taken at the farm Hackthorne.

The habitat is arid, hot bushveld and semi-desert where the bushes often occur on limestone, sometimes with mopane or forming exclusive stands. The species is not considered to be threatened in its habitat early in the twenty first century (Mannheimer and Curtis, (Eds.), 2009; Coates Palgrave, 2002; Leistner, (Ed.), 2000; Van Wyk and Van Wyk, 1997; iNaturalist; Wikipedia; http://redlist.sanbi.org).