Home » TYPES » Shrubs » Chironia baccifera fruit paraphernalia
Back to Category Overview
Total images in all categories: 12,068
Total number of hits on all images: 7,363,220 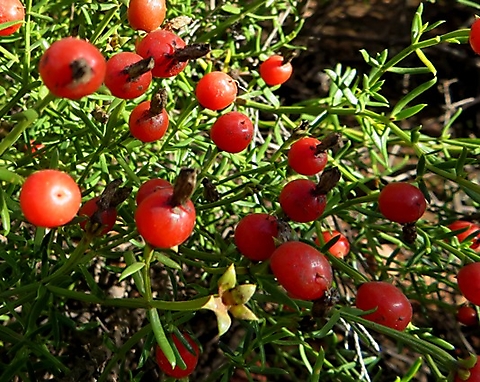 The about spherical red shape of Chironia baccifera fruits is a common sight. The specific name, baccifera, is derived from the Latin words bacca meaning berry and fero meaning to carry or bear, referring to the unusual fruit form of berries in an otherwise capsule-bearing genus.

The angular, brown, cigar-like structure, erect upon some of the fruits, must be the short-term retained, discoloured petal lobes. The C. baccifera ovary present in the earlier flower was superior, which means the petals emerged from below it, but formed a tube around the ovary that constricted again above it, around the bases of the exserted style and anthers. It seems as if the tube part of the petals normally disappears early from around the fruit body, but the lobe parts may converge into a column as they whither and linger above the fruit for some period.

There are other fruits in picture that have only their styles protruding at their tips. Yet other ones have only a bellybutton dark marking remaining at the top of the fruit.

One fruit has dropped off or has been eaten by a bird, leaving five spreading, pointed calyx lobes around the receptacle where a fruit and earlier its flower had once been attached (Vlok and Schutte-Vlok, 2015; Manning, 2007; Pooley, 1998; Andrew, 2017; iNaturalist).