Home » TYPES » Shrubs » Catophractes alexandri branches
Back to Category Overview
Total images in all categories: 12,081
Total number of hits on all images: 7,379,220 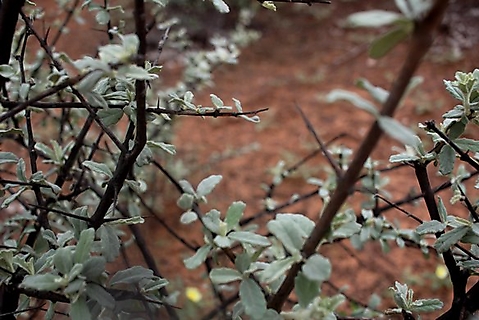 The rigid, spreading to erect branches of Catophractes alexandri are dark brown to nearly black. Initially quite hairy, later losing most of it, the spine-tipped branches become smooth and shiny as they age. New branchlets grow opposite each other, perpendicular to the previous pair in a decussate way.

The San people use or used the hard branches of this bush to light a fire. They do or did this by rolling a vertical trumpet thorn stick rapidly on a horizontal raisin bush (Grewia retinervis) stick. This is continued until friction causes smouldering at the point of contact.

The simple leaves of C. alexandri grow opposite, whorled or clustered on stalks from 2 mm to 5 mm long. The leaf-shape is obovate to oblong, the tip rounded to bluntly pointed and the base rounded to tapering. The margins are irregularly and often deeply toothed to scalloped. The blades are lead-grey above, paler grey below, woolly on both surfaces. The midrib and lateral veins are sunken above, prominent below. The leaf dimensions are 1 cm to 4 cm long and 0,5 cm to 2,5 cm wide.