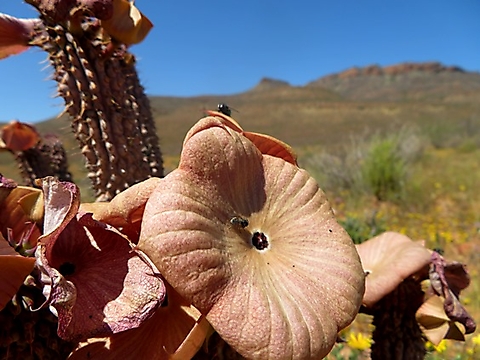 There are flies in the Biedouw Valley as at home. Hoodia gordonii makes sure of it: These flowers lure and feed them.

The flies oblige, reciprocating by pollinating the flowers. Their self-interest is served by the assurance that there will be seed for new flowers to feed fly offspring in the future.

A nifty arrangement brought about without a single thought required. Evolution thinks for us all by simply killing those that don’t fit any workable plan before they have a chance to breed. Those suitably endowed for the challenges out there, live to breed.

Thus the genetic endowment of the children shift in the appropriate direction over few or many generations and the species adaptation is in place... until the next challenging issue arises.

Where would all species have been without the selective timing of death? Its such a useful tool in shaping life (White and Sloane, 1937; Shearing and Van Heerden, 2008; Le Roux, et al, 2005; iNaturalist).