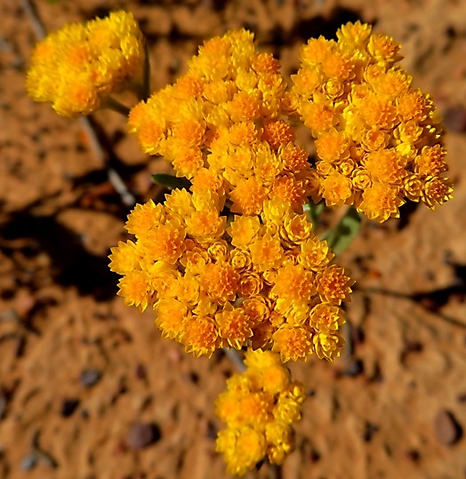 Enough is as good as a feast. Festivities are rated by participants, organisers and sponsors, not by the decor. And unhappiness is the gap between what is available versus what is craved, therefore an emotion only occurring in species suitably endowed for disputing what might be enough. Neither festivities nor happiness burden or bother the plants around us.

So, the question whether this feast is enough for Helichrysum moeserianum is irrelevant. It doesn’t even know that people avidly watching and photographing its body parts have a thinking facility that might cause it harm, extinction or conservation.

Life is the plant's only option, its (stationary) route without detours to and until death, hopefully not untimely, i.e. before setting seed. A plant’s invisible, genetic programming dictates what happens to it at every moment in every part and every cell. This holds for every living thing unencumbered by a brain.

The brain is an evolutionary afterthought, covering only limited functional components of even the brainiest species. The prompts governing plant body actions are all in place, each a surprise until it appears. The bigger scheme of things is automated in nature, by nature, all over nature, wherever there’s life.

And even where there’s not! For is the immense inorganic part of the universe not in some ways similar in functioning? The small, carbon-based, living component of the world has acquired many moves, from wriggling, swimming, running and flying to kissing. But the big movements of the world, spinning, exploding and expanding, are all out there in space among stars, galaxies and more, known to people in photos, meticulous observation, recording, theory and chatter.

Some of the chatter is informed, relatively but increasingly. There are pockets of excitement at the movements along the boundaries of every science, awe at the magnificence of the universe being explored. Frontiers increase at bigger and smaller scale, from nano proportions to billions of light years and in diversity in the backyard. Yet more living bodies, the sciences, but abstract ones like languages and the arts, as life extends its tentacles by what the living create.

There is a hunger in some of the living for understanding the scientific laws that govern it all. This quest multiplies the frontiers for the living to keep exploring and maybe further the boundaries of life in yet untold ways.

Life without a brain is cool where growing leaves is part of it. A plant’s programmed responses continue in the moment, unconcerned with what other similarly “programmed” entities do to it when hungry. Brainlessness probably helps if you're food.

The stories about trees communicating, so imperceptibly that there isn't consensus about the stories being factual, come to mind. They secrete chemicals in social system responsiveness? If they can do that, the smallest blade of grass might do something similar, albeit scaled down?

What did the early people on earth sense in their environment when they conceived the notion of animism? All figments of their own minds, or were there perceptive skills, bonding with nature beyond the capacity of modern humanity? (Homo neanderthalensis brains were bigger than those of Homo sapiens, but they're extinct and we've got computers.)

Spirits benign or not, residing in trees and rocks were an early starting point, possibly derailed in superstition? Are we missing something?

Check whether someone is watching before hugging your next tree, for life isn't all science. This is not the kind of madness for which we need to be locked up or take tablets. Who knows what remains to be discovered?