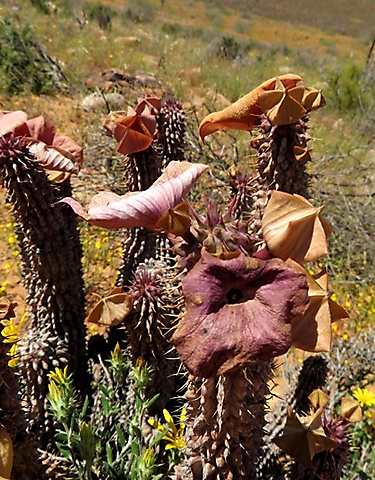 Monday washing day scenes get their turn on Hoodia gordonii bloomtime stems: Withering corollas lose shape but gain colour diversity, fit for representing the fluttering garment selection on display behind many a house.

The club-shaped, succulent stems do not quite make it in the washing line lookalike, but spring flowering relaxes standards for liberties to slip in.

Living in the veld for longer than a weekend brings those days when washing is draped over shrubs in the sun… and searched for later when the wind contributed to the drying.

There seems to have been a break in flowering on this plant: There are only old, withering flowers and buds of a second blooming surge. Flowering time-out can be caused by a range of factors, in plants it's never sloth (White and Sloane, 1937; Shearing and Van Heerden, 2008; Le Roux, et al, 2005; iNaturalist).