Home » TYPES » Parasites » Lacomucinaea lineata
Back to Category Overview
Total images in all categories: 12,091
Total number of hits on all images: 7,393,160 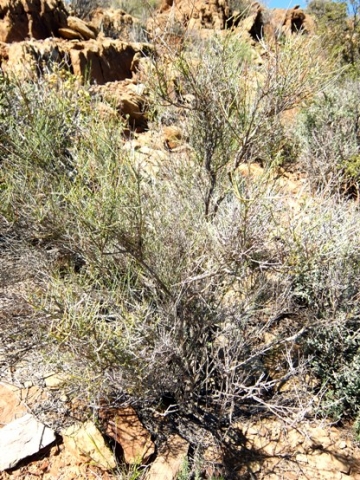 Lacomucinaea lineata, previously Thesium lineatum and in Afrikaans the witstorm (white storm), is a root hemiparasite, a rigid, mostly leafless woody shrub reaching 1 m in height, occasionally higher and spreading. The plants are browsed, but toxic, particularly to sheep when flowering or fruiting.

The plant is mostly found in semi-arid westerly regions from Namibia and Namaqualand to the Little Karoo. It is seen among varied karoid vegetation types in loam and clay soils. It is most abundant in the succulent Karoo and Nama Karoo biomes but absent from most fynbos regions apart from some renosterveld and the Hantam Plateau. The species is not considered threatened in habitat early in the twenty first century.