Home » TYPES » Parasites » Hyobanche glabrata flowers
Back to Category Overview
Total images in all categories: 11,029
Total number of hits on all images: 5,676,653 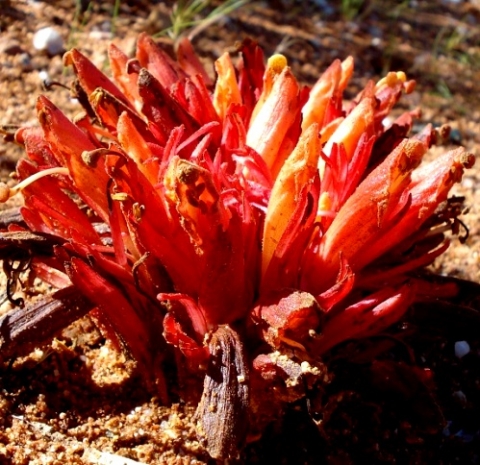 Hyobanche glabrata has large red, salmon or scarlet flowers growing in a dense, flat, head-like spike. A five-lobed and two-lipped calyx envelops the corolla at the base on a short pedicel. The cylindrical flowers become 5 cm long with three corolla lobes. The stamens with four yellow anthers are exserted, as is the globose stigma, standing taller than the stamens on a style curving near the end.

Flowering happens from midwinter to midspring. This photo was taken in August north of Garies (Manning, 2009; JSTOR).