Home » TYPES » Parasites » Melasma scabrum var. scabrum
Back to Category Overview
Total images in all categories: 11,104
Total number of hits on all images: 5,772,481 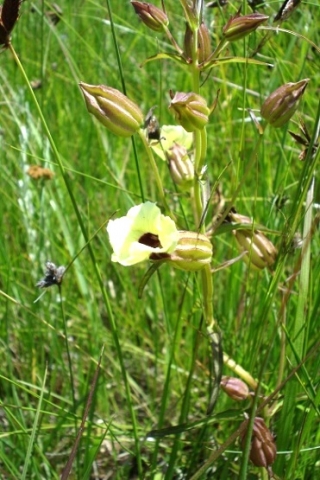 The plant grows erect stems to 70 cm, course and sticky to the touch. The roots are saffron-coloured and fibrous. The leaves are opposite, narrowly lanceolate, without stalks and photosynthetic. Leaf surfaces are hairy, leaf margins sometimes toothed.

The flowers grow in a lax raceme. Flowers are pale yellow with a purple throat, growing at branch tips. The corolla is funnel-shaped with five lobes, measuring about 3 cm across. The stamens are hairy, the style exserted. The large, five-lobed calyx becomes balloon-like in the fruit.

The variety is found almost throughout South Africa, apart from the dry north-western region in and around the Northern Cape. The photo was taken in January at Qacha’s Nek.

The habitat is moist grassland, even marshy areas, the plants growing in sandy soil. The variety is not considered to be threatened in its habitat early in the twenty first century.

The Melasma genus forms part of the Orobanchaceae or broomrape family. M. scabrum is the only one of the five species of the genus occurring in South Africa. It shows a resemblance to some Harveya plants (Manning, 2009; Vlok and Schutte-Vlok, 2010; iSpot; JSTOR; http://redlist.sanbi.org).