Home » TYPES » Parasites » Hyobanche glabrata
Back to Category Overview
Total images in all categories: 11,792
Total number of hits on all images: 6,941,630 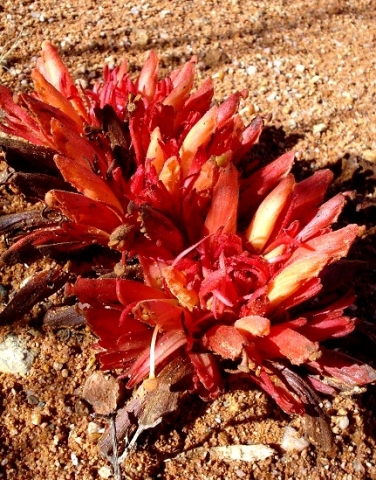 Hyobanche glabrata is a fleshy root parasite with scale-like leaves that lack chlorophyll. The leaves are small and scattered along the stem, overlapping like tiles and are smaller low down. The plant parasitises on certain shrubby daisies via a fleshy haustorium, which is an underground connecting root attaching to the root of a nearby host plant, penetrating the root tissue to withdraw nutrients from the host.

In Afrikaans the plant is commonly known as klein wolwekos (small wolves’ food). The name may be derived from the red appearance that, in the absence of green leaves, resembles a piece of raw meat or carrion lying on the ground.

The habitat is arid scrubland, including renosterveld and succulent Karoo. The species is not considered to be threatened in its habitat early in the twenty first century.