Home » TYPES » Parasites » Lacomucinaea lineata ripe fruit
Back to Category Overview
Total images in all categories: 12,087
Total number of hits on all images: 7,392,932 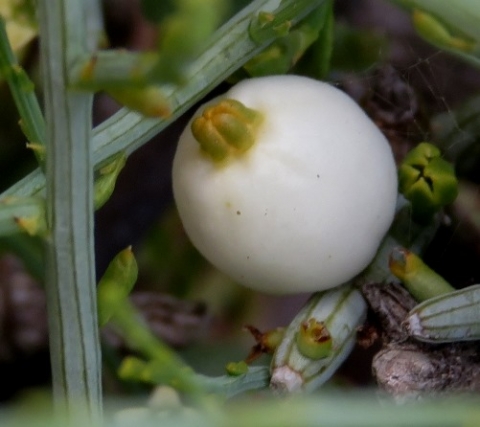 The tiny Lacomucinaea lineata fruit appears egg-like, but for the green perianth tips at the end. A proper egg would also have had one narrower end, so the shape here elliptoid, rather than ovoid.

This Namaqualand plant is in a hurry this year. Flowering normally happens from late winter and may continue through summer, depending on rain. The photo, taken north of Springbok, shows ripe fruit already in the first week of August.

In picture are also some of the plant’s typical stem surface striations, formed by fibres in raised ridges. The regular, equidistant parallel lines are green on a grey background. The Afrikaans common name, witstorm (white storm), may relate to the small white flowers produced in season by the plant, or to these many pale stems seen all year round, not only at bloomtime.