Home » TYPES » Parasites » Hyobanche sanguinea
Back to Category Overview
Total images in all categories: 12,087
Total number of hits on all images: 7,393,084 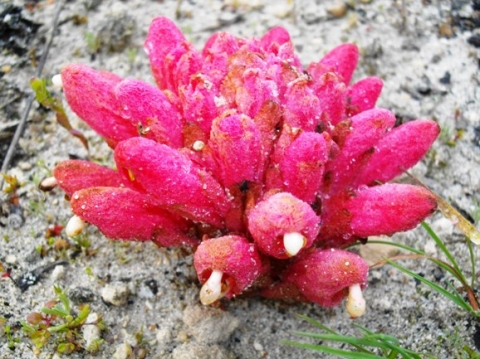 Hyobanche sanguinea, commonly in Afrikaans the jakkalsblom (jackal flower) or katnaels (cat nails), is a fleshy, holoparasitic plant attached to the roots of any one of a series of host plants, notably Passerina and some Proteaceae.

The leaves are only small, red scales containing no chlorophyll. The flower may measure 15 cm across and 5 cm high.

The species distribution is in the Northern Cape in Namaqualand, parts of the Free State and the Western and Eastern Cape. It also grows in Namibia and Swaziland.

The habitat is sandy or loamy slopes and flats. The species is not considered to be threatened in its habitat early in the twenty first century (Vlok and Schutte-Vlok, 2015; Manning, 2007; Bond and Goldblatt, 1984; Stoneman, 1928; http://redlist.sanbi.org).