Home » TYPES » Parasites » Lacomucinaea lineata buds and flowers
Back to Category Overview
Total images in all categories: 11,528
Total number of hits on all images: 6,610,462 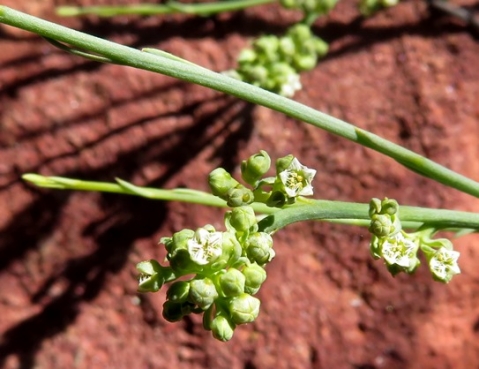 The calyx of L. lineata is fused to the ovary. The tubeless corolla is radially symmetrical, its triangular lobes up to 1,5 mm long while the corolla diameter is about 3 mm.

The five stamens have their filaments emerging from the seam between the disc and the corolla, the ovary inferior. The thread-like style is only 0,8 mm long, ending in a two-lobed stigma positioned at the level of the anthers.

The fruiting pedicel of L. lineata does not enlarge to form an elaiosome as is common in many Thesium species. These smooth, fleshy fruits would therefore not be expected to be distributed by ants but in some other way. The fruit is a drupe upon which the brown remains of the corolla persist.

The stem surfaces of the plant have longitudinal lines, striations that form part of the assessment that removed Thesium lineatum from Thesium and placing it in its own genus, Lacomucinaea. The striations are caused by fibres inside raised ridges on the stems (Lacomucinaea, a new monotypic genus in Thesiaceae (Santalales) by Nickrent and Garcia, 2015, Researchgate; Vlok and Schutte-Vlok, 2010).