Home » TYPES » Mesembs » Mesembs near Broken Hill in Australia
Back to Category Overview
Total images in all categories: 11,921
Total number of hits on all images: 7,169,656

Mesembs near Broken Hill in Australia 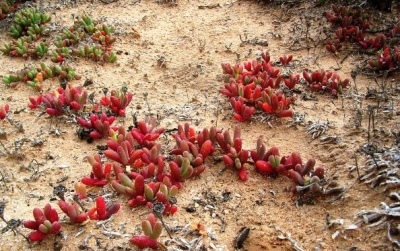 The Aizoaceae family, still known to some as the Mesembryanthemaceae, do well in many arid and semi-arid environments, often in remote places on earth.  Like many insect species, they thrive in what humans might consider deteriorated living conditions of hotter and drier.

There may be an increase in heat and drought adapted plant and animal species in the future, less people friendly conditions if current trends continue. People, like plants are adaptable though, can and should learn to use less water, live smartly. It will be hard if the grasses are replaced by succulents and the grains harder to cultivate, but that is a different problem. A more resilient vegetation as a ground cover by the house is better than the bare, baking sand.

Coastal regions losing land to rising sea levels? Not an attractive prospect anywhere! Such things may occur abruptly or slowly. When insidiously, not noticed with alarm, daily life carries on, although things are not the same. What else can people do? Every generation gets used to new conditions, becomes resigned to read in books about the good old days when temperatures were lower and the land mass larger. We learn to cope, define the "new normal" while arguing whether people have a hand in the changes to nature.

Maybe the scientists are wrong, maybe it doesn't get so bad as they predict. Maybe it doesn't happen in our time. Maybe it wasn't our fault, was going to happen anyway. Maybe it's too late to do something about it now. There is no elephant in the room, for they're exterminating the elephants for their ivory.

What's the Government doing about it? Leave it to David Attenborough and Greta Thunberg. What can the ordinary citizen do anyway? I'm too ordinary to be guilty of a thing as big as this!

Surely small steps, do the little things within reach, or at least do them first. Frequent drought conditions, heat waves, water restrictions and  fighting fires all point to the benefits of succulent gardens. Australia has succulents, also mesembs that make good garden plants. So does South Africa. Then think, what else can we do about this thing that looms lifesize and life threatening in front of us all.