Home » TYPES » Mesembs » Nelia schlechteri fruit capsule
Back to Category Overview
Total images in all categories: 11,110
Total number of hits on all images: 5,777,963 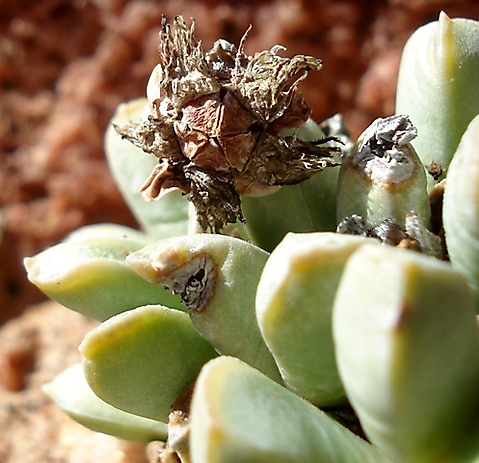 The woody fruit capsule of Nelia schlechteri has five locules, its base conical. The valves recurve when open. The expanding keels are yellow and there are covering membranes. The pear-shaped to heart-shaped seeds are yellow and warty, about 1 mm long.

The flowers that preceded the capsules grew solitary or in groups of three. There are five unequal sepals and two bracts on the pedicel. The flowers are nearly white on a longish pedicel, emerging from the side of a leaf-pair.

The narrow, short petals are stiff, oblong, in several whorls and spreading to a diameter sometimes slightly over 2 cm. There are short hairs at the petal bases, morphing into staminodes around the stamens and joined at the base.

The bearded stamens diverge in their upper parts. The ovary is inferior with slightly convex upper surface. The placentas are on the floors of the locules. The five, small, green stigmas are three-angled, hidden in a tube formed by the sepals over the ovary.

Once opened in a morning the flower does not close again, lasting for about three weeks. Flowering happens in winter (Williamson, 2010; Smith, et al, 1998; Herre, 1971; iNaturalist).