Home » TYPES » Mesembs » Malotigena frantiskae-niederlovae
Back to Category Overview
Total images in all categories: 11,411
Total number of hits on all images: 6,181,722 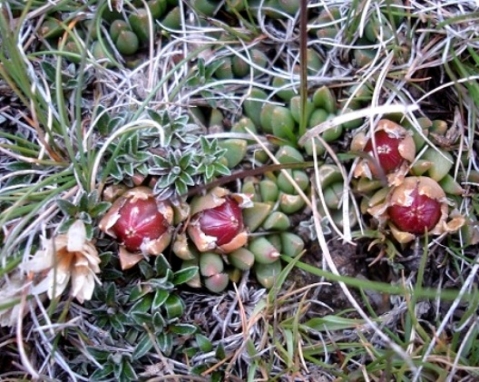 This rare, recently described and still controversial plant was photographed in June near Mokhotlong in the north-east of Lesotho in high altitude grassland. The species is guessed to be endemic to Lesotho and the genus monotypic. Malotigena frantiskae-niederlovae resembles a few Delosperma species, but none of them precisely and thoughts of it being a hybrid also exist.

The plant is a compact shrublet with creeping branches and succulent leaves. The lanceolate leaves are triangular in cross-section near their apices due to distinct keels. They taper to acute tips. Tiny hair-like projections grow along the angular leaf margins. Leaves are opposite, positioned erectly with short internodes on the trailing branches. Leaves become 2 cm long.

The winter flowers are yellow, subtended by five or six fleshy sepals. A yellow cone of staminodes, white at the base, forms the flower centre. The sepals with their pointed tips are still prominent around the globose fruit capsules in picture. Five or six locules with pinkish red, pointed valves top the capsules (iSpot).