Home » TYPES » Mesembs » Malephora purpureo-crocea
Back to Category Overview
Total images in all categories: 11,411
Total number of hits on all images: 6,181,812 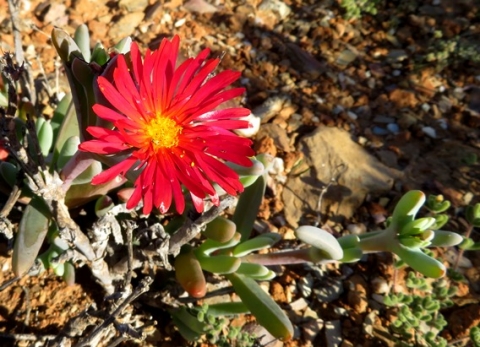 Malephora purpureo-crocea is a spreading leaf-succulent with spongy branches reaching up to 30 cm in height.

The blue-green, opposite leaves are more three-angled than terete or cylindrical and amply succulent, fused slightly at the base and ending in blunt tips.

The species is endemic to parts of the Northern Cape and Western Cape, mostly found in southern Namaqualand, particularly the Knersvlakte.

The habitat is sandy and stony flats in arid, winter rainfall land. The species is not considered to be threatened in its habitat early in the twenty first century (Le Roux, et al, 2005; Smith, et al, 1998; iNaturalist; http://redlist.sanbi.org).