Home » TYPES » Mesembs » Mitrophyllum mitratum
Back to Category Overview
Total images in all categories: 12,082
Total number of hits on all images: 7,379,600 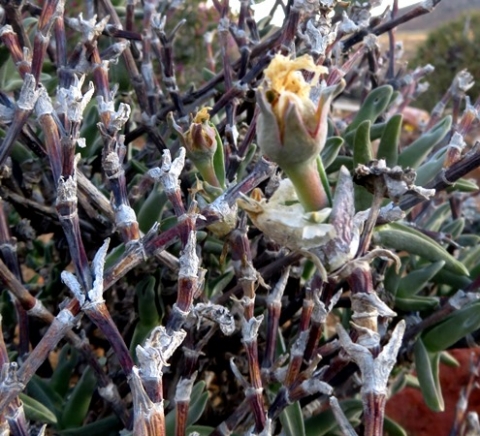 Mitrophyllum mitratum is a succulent shrublet of the mesemb or Aizoaceae family reaching up to 60 cm in height (usually after many years). The twiggy plant tends to clump, its habit either sub-erect or lax. The dry, branched stems are tipped with the latest winter’s dull green growth.

All six the Mitrophyllum species are found in the Richtersveld, Northern Cape. M. mitratum is found in a smaller, south-western part of the region, between obscure places bearing quaint names of Vyftienmyl-se-berge (fifteen mile’s mountains) and Lekkersing (singing enjoyably), about 60 km east of Port Nolloth. The singing is done by talented villagers, a sand dune activated or inspired by wind and a small fountain producing the welcome sound of moving water in parched surroundings. Rural legend created or enhanced (some of) these possibilities.

The habitat of M. mitratum is arid, lower slopes in rocky places. The cold Benguela ocean current influences the climate of the low rainfall west coast region where these plants grow, causing frequent misty periods that provide moisture to the low-need succulents. The species is not considered to be threatened in its habitat early in the twenty first century (Williamson, 2010; Frandsen, 2017; Smith, et al, 1998; Herre, 1971; iNaturalist; http://redlist.sanbi.org).