Home » TYPES » Mesembs » Mitrophyllum mitratum old flower and capsule
Back to Category Overview
Total images in all categories: 12,068
Total number of hits on all images: 7,360,622 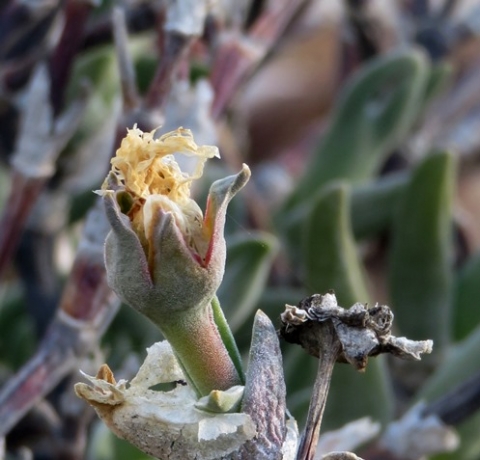 The white or yellow, sometimes purplish mesemb type flower of Mitrophyllum mitratum grows solitary from a stem-tip or in small, lax, cyme-shaped clusters. There are five, unequal sepals per flower, free to the base.

The petals grow in three or four whorls around the numerous stamens that initially form a column, later spread. The nectar glands are positioned in a circle around the five awl-shaped stigmas. The flowers are highly scented, their aroma reminiscent of snapdragon flowers. The inferior ovary has five to seven locules.

The flower measures 3 cm in diameter, growing on stems up to 30 cm tall. The flowers typically open around noon, closing before dark.