Home » TYPES » Mesembs » Mestoklema tuberosum
Back to Category Overview
Total images in all categories: 11,506
Total number of hits on all images: 6,488,436 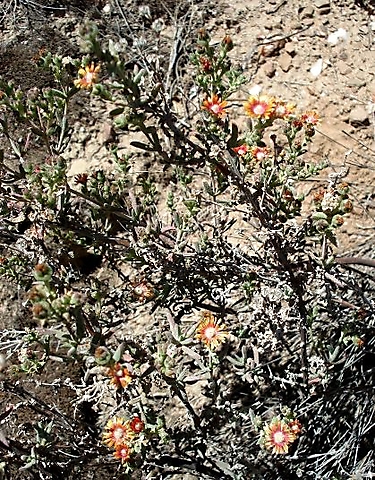 Mestoklema tuberosum, the donkey fig or copper mesemb is a shrubby, much-branched leaf succulent growing from tuberous roots to 1 m in height. The large tubers resembling sweet potatoes are often visible above-ground. There are six species in the genus.

The species distribution is in the Eastern Cape, the Western Cape and possibly eastern parts of the Northern Cape, as well as Namibia.

The habitat is dry, karoid scrubland in loam and other soil types. The plants are commonly browsed, also by donkeys, hence the name. One of the Afrikaans common names is hongerdoring (hungry thorn), referring to the plant’s value as famine food during drought. The species is not considered to be threatened in its habitat early in the twenty first century (Vlok and Schutte-Vlok, 2015; Smith, et al, 1998; Herre, 1971; iNaturalist; http://www.llifle.com; http://redlist.sanbi.org).