Home » TYPES » Mesembs » Cylindrophyllum comptonii of the Little Karoo
Back to Category Overview
Total images in all categories: 11,506
Total number of hits on all images: 6,515,974 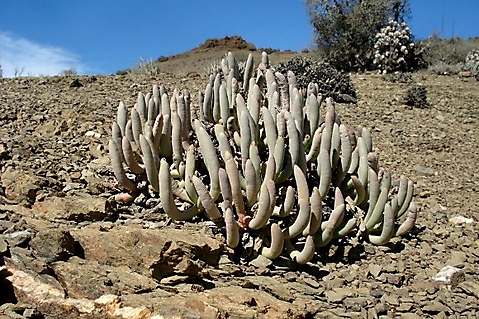 Solitary creamy white to dull straw-yellow flowers open at noon and close in the evening. The petals angle up and out, the flower diameter about 4 cm. The flower centre where numerous stamens are erect may be slightly darker in colour, also from the staminodes around the stamens. The stigmas are awl-shaped, shorter than the stamens. Flowering happens in spring and early summer.

The fruit capsules have conical tops, comprising from five to eleven locules. The valve wings are awn-like and the expanding keels toothed. Closing membranes are present, the closing bodies small.

The species distribution is in the Little Karoo and part of the Great Karoo to Laingsburg. The habitat is karoid scrub in stony clay soils on north-facing slopes. The species is not considered to be threatened in its habitat early in the twenty first century (Frandsen, 2017; Vlok and Schutte-Vlok, 2015; Smith, et al, 1998; Bond and Goldblatt, 1984; iNaturalist; http://redlist.sanbi.org).