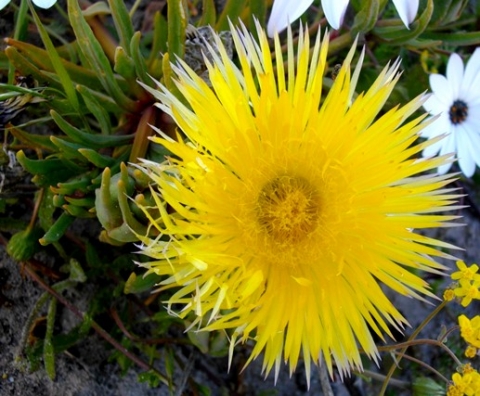 The multitude of pale yellow petals spread thinly, pointing away from the stamens and staminodes in the flower centre of Conicosia pugioniformis subsp. pugioniformis. This brings about the soft texture in the delicate structure of the flower. Tiny water cells occur on these petal margins.

This subspecies was found growing on the west coast near Grotto Bay, too far south to be subsp. alborosea that lives in the Northern Cape, (particularly Namaqualand) and too far north (and west) to be subsp. muirii that grows from Hawston to Hankey.

None of these subspecies is considered to be threatened in their habitats early in the twenty first century (Smith, et al, 1998; Manning and Goldblatt, 1996; iSpot; www.redlist.sanbi.org).