Home » TYPES » Mesembs » Chasmatophyllum musculinum
Back to Category Overview
Total images in all categories: 11,413
Total number of hits on all images: 6,190,373 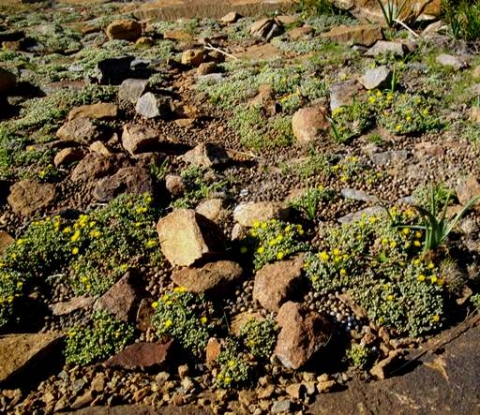 Chasmatophyllum musculinum, commonly known in Afrikaans as the geelswaelstertvygie (yellow swallowtail mesemb), is the most frequently seen member of its genus of six species. The compact or tufted creeping plant expands its small ground-covering mat by thick underground rhizomes that root easily as they spread.

Above-ground, the stems are short and somewhat woody, unlike the usually herbaceous stems common among its mesemb relatives. Earlier botanical names for this plant include Mesembryanthemum musculinum and Stomatium musculinum.

The species is widely distributed, but discontinuously. Among the places it grows are the Great Karas Mountains in Namibia, the Cape Peninsula and parts of the Karoo from Sutherland to Willowmore, as well as Lesotho and southern Gauteng. Greatest density of the species is in the north of the Eastern Cape and the southern Free State.

The habitat is semi-arid to arid, the plants often stunted in rocky places, but may cover extended patches of ground when growing in deep soil, as the ones in picture seen near Hannover in the Northern Cape. The species is not considered to be threatened in its habitat early in the twenty first century (Frandsen, 2017; Smith, et al, 1998; iSpot; www.redlist.sanbi.org).